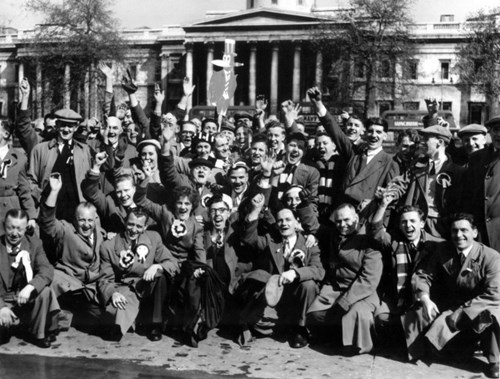 Newcastle fans in Trafalgar Square, before the 1955 FA Cup final.
Image courtesy of the Newcastle Chronicle.

Krystal remembers watching the 1955 FA Cup Final on television. This was the first of Newcastle’s FA Cup Finals to be televised. However, this was at a time when still only a relatively small number of people could afford to buy or rent a TV:

“We won, and Jackie Millburn scored (in the first minute). We were all shouting, in the house we were all shouting, as if we were at the match, even my grandmother who was not a football fan, and my father and I, “whey!”. None of these celebrations or high fives, nothing, we didn’t do that sort of thing in those days, but certainly it was a fantastic feeling. I remember well.”

“Yeah I watched it, somebody up the street had a television. Black and white. We just crammed in, everybody’s sitting on the floor and all over it was just a small picture, a big box with a small picture, but ah, heart rate pounding, it was great.  Of course everybody was out in the street after the win. It was everybody that could get in, I think. I made sure I was first [laughs] because I was very friendly with the family and they said I could go and watch. We just were dying to get there to see. Honestly when you think back, just a tiny little TV, [laughs] but it was great!”

Beatrice recalls listening to the 1955 FA Cup final on the radio:

“Of course, listened to it on the radio and you got ball by ball. I mean it really irritates me the so-called commentaries as they are having a conversation. They are not describing what is happening on the field they are just chatting away about, ‘He did this…’ But on the radio it was the same with any sporting thing,  they had these commentators who could describe everything that was happening as it happened, they were brilliant. How they remembered all their names I don’t know? Oh yes we all sat round the radio anyway, that was what we did in the evenings back then. And then you could hear people come running out into the street shouting you know when there was a goal scored!”

Jackie Milburn (right) and team mates after winning the FA Cup in 1955.
Image courtesy of the Newcastle Chronicle 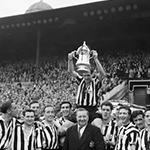 1955 FA Cup celebrations in the city 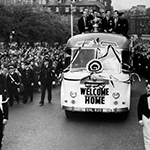