Some men thought women were not somehow ‘proper’ fans, that they did not understand the game, or support the team in the same way as men. But of course, women were always ‘proper’ and knowledgeable fans!

“I loved it. I loved it….I used to shout my head off. When I started going to matches with the lad I married, he was disgusted.”.

Beryl also remembers when she started going out with her future husband and how she initially thought his being a Sunderland fan would mean the relationship would be brought to an early end:

“When I first went out with Bob, I went home and my mother said, “Well what’s this one like?” And I said, “Oh mum, it won’t last,” I says, “He’s two years younger than me. And he’s a Sunderland supporter.” And my mum said “Oh dear me.” …. But I would say he was a lukewarm Sunderland supporter. He wasn’t a fanatic at all. And went to an odd match, but very odd. Because you see he was a playing football on a Saturday afternoon. I was playing hockey. But we did go. We went to Roker Park and one of his friends said, “Here, is she coming?” And Bob said, “Oh yes. Uh huh.” “Well she doesn’t know nowt about football.” Always remember him saying that. Bob said:  “She knows more than you.”

Judy can remember many of the players from when she started watching Newcastle United:

“Well, there was Bobby Mitchell. And he played on the left, outside left. And there was Walker and he played on the right side. And we had the Robledos. George was inside, number 10. And I think it was- there was another one. Oh, I cannot remember the other one that was there. There was Joe Harvey and he was at the back. And Ronnie Simpson was the goalkeeper. Bobby Cowell, he played at the back. And who was the other one at the back? Matt Michael, he played at the back as well. Who was the other one? Tom Casey played for them at one time. But so did Bobby Stokoe at one time. I can remember lots of them at different times. But, oh, when Jackie Milburn was there, it was amazing.” 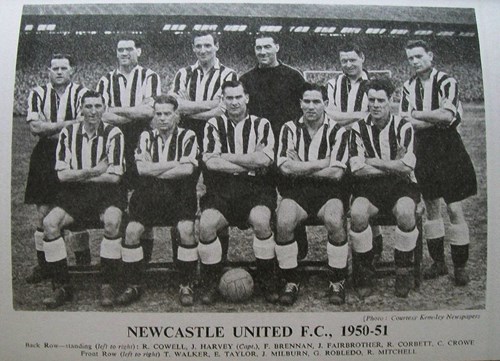