The players were heroes to the women fans because they were part of the community, showed fair play, and appeared to live good, clean lives. Some were also thought to be good looking!

“I just thought they were wonderful blokes you know. Good players. Not cheats. You know and there was no cheating or anything. And they seemed to live nice lives. I mean, not going on the booze and causing problems and that. And quite quiet spoken people usually. Well they were good footballers. But they were nice looking as well.

And when you think these fellows they were just wandering around mingling among people. They weren’t on a pedestal like they are now I mean they didn’t have lots of money as they were only paid about £10 a week or something I think.

And of course, you discussed the players. And always discussing the players at school. I remember when the Robledo brothers came. That was a bit later on.“

The players were very much part of the local community, living among the fans, as the players were on fairly modest incomes. The maximum wage for footballers at this time was just £6 a week.

“Just up the street from my mother, about three or four houses up, there were the Robledo brothers. Lenny White, who had four daughters, and then he had a son, lived about six houses down from my mother.  Across from my husband, we had the manager – we had the lot.” 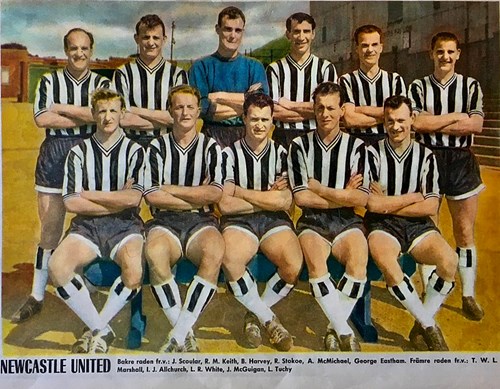