Why Many Women Could Not Go To Football

While some women were able to watch Newcastle United play, others could not, for a number of reasons. There was a baby boom after the Second World War, so many women were looking after very young children, and could only go if someone looked after them.

In those days, it would not be the expectation that the husband would do this. So women might go when they were older as children, if their father would take them, and who would pay, or with a boyfriend, who was always expected to pay. If a young woman got a good job, she could afford to go, with a female friend. Mothers could start to go again when their children were old enough to go with them.

But the biggest barrier was money. Finances were very tight for working class families immediately after the Second World War, and even in the slightly more prosperous 1950s.  Beatrice had a good job but could not afford to go, because she had to give all her earnings to her mother.

“I was lucky that I got this job in County Hall, but my mother used to come on the last Friday in the month when we got paid and wait for me, because we were paid in cash, so she would wait for me to come and give her my wages. That was grim, I think. And it must have been for her to do that. Everybody handed their money into the pot sort of thing. We were well fed and we were well looked after, but all the money had to go into the pot….

… My dad just had pocket money, that was how he and I could go every fortnight to watch the football. It was only if he had any spare cash…. 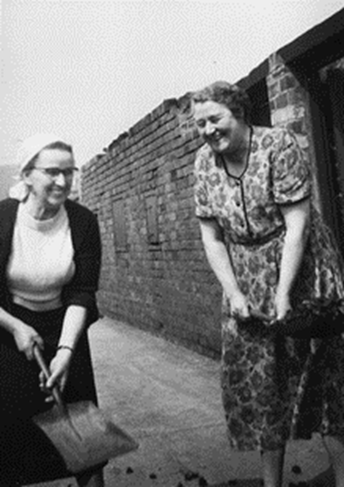