The Style of Play

Beatrice remembers that the players’ positions on the pitch were more fixed in the 1950s. For example,  if you played on the wing, you stayed on the wing:

“In those days players had a specific position. If you were a winger you were a winger,  you didn’t encroach into the field, you stayed on the wing. … it was like a sort of zone thing like in basketball. So you could spend the whole match not getting the ball, on the wing…..

… And then along came Don Revie …  they called it the Revie Plan, it was a sort of a diamond thing, he changed the way that it was played.”

Krystal says the positions were different then, she remembers which position on the pitch each player was numbered. Football was more attacking, with 5 forwards. Though she says this changed after England lost to Hungary in 1953 and 1954. She liked the attacking system better:

“The positions were different in those days. Every match, it didn’t matter who played, you could play as number 4 one week, I could play in the same position next week, and I would be number 4. Now the numbers are for the players, then they were for the position. Number 1 was your goalkeeper, you had two full backs, right fall back was number 2 and left fall back was number 3, they were directly in front of the goalkeeper. Then in front of them you had three half backs; there was right half which was number 4, centre half was number 5 and left half was number 6, and then what a sight, five forwards flying up the field; oh the excitement, five forwards, all in a line, it was so exciting.”

“there were no substitutes at all in those days. I think it was, I’m not sure, but I’ve put approximately 1965 before substitutes came in, and then only one, so if you have a player injured before that… I remember once Newcastle, we had three people playing as goalkeeper because each one was injured from the team. It was at West Ham; West Ham won 8-1 and we were down to eight men because three were injured, now how about that?”

Krystal remembers correctly! Substitutes were first permitted for the 1965-1966 season, with one substitute per team and only if a player was injured. 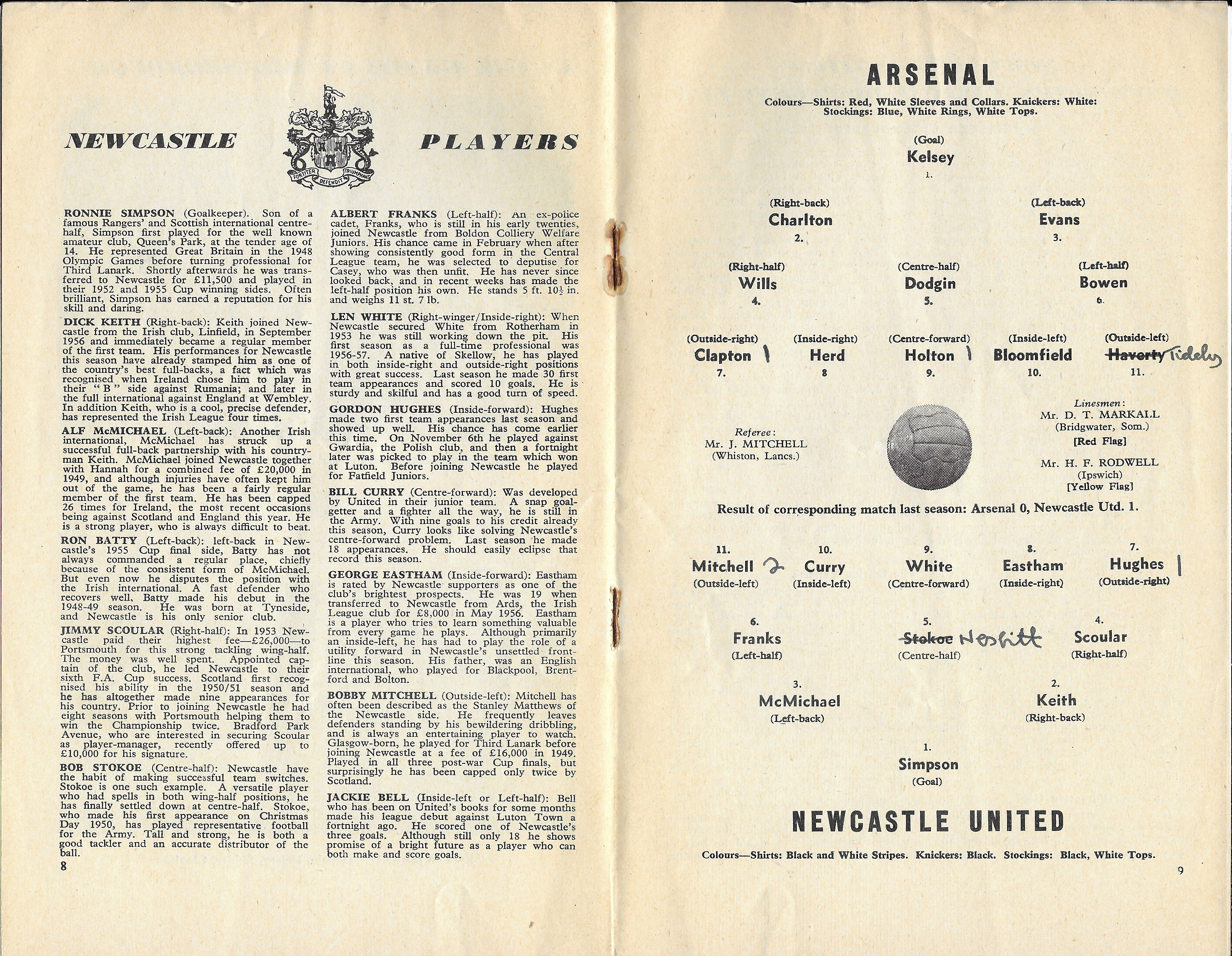 The Newcastle United squad for an away match at Arsenal in the 1957, showing the team in a 2-3-5 formation. From the Arsenal programme for the match. Note the handwritten changes of a players, to show who was actually in the team on the day. There had been changes since the programme was printed.