Joan’s first impressions of standing to watch matches were:

“It was great, I thought.  I was only young then.  But all there was, was like a staircase – that row, that row, and that row.  And then I had, I think about waist high, a bar (crush barrier) going like that, and down.  And if I could get beside one of those, oh well, that was great, because you could hold on.  But as I say, you would see it all.  The crowd was just like a sea going forward, to see the goals, and then to come back…. You’ll never ever see that anywhere, because they’re all seating now, aren’t they?”

Beatrice also remembers the movement of the crowd and how children were passed down to the front to prevent them being pushed:

“So, when the crowds came down you were either pushed forward into a barrier or you hurtled down the steps if you were in front and you were just jammed against other people. I never was because we were in this little corner but I could see it happening. You just have to lose your footing on those steps going down and you would be trampled underfoot, so I don’t know how people didn’t get injured…..…. When you think of it now how people didn’t get killed I do not know because looking down at the Gallowgate end that was the popular end as it was the cheapest whenever there was any exciting part in the play everybody sort of, it was like watching a waterfall. I don’t know if you have seen pictures of that? They would all just tumble down and then all go back up again. It was quite frightening really. So most of the young boys were put down on the pitch side, they sat on the side of the pitch and if one of them was being pushed around the men would lift them up and pass them down over their heads down to the bottom and they would sit there. I didn’t want to go and sit among the boys. Because you know, they wouldn’t like it, the boys wouldn’t like a girl being there.”

Beatrice recalls that there was little or no singing on the terraces in the 1950s:

“You shouted and booed and what not but there wasn’t the singing. That didn’t come in I am sure until the 1970s.”

Beryl also remembers the pushing and swaying in the crowd:

“Oh you got pushed. You did get pushed. My dad always used to get to a barrier, and used to stand at it. But actually it got very nasty sometimes when the crowd started to push. Because if you were at the barrier, it sort of stuck in you sometimes when you were getting pushed. And they used to pass kids downs over the heads to the front. And they often said they would pass me down. And I’m saying, “No, I’m not going to do that. No, no, no. no. I’m staying here.” When I could have got passed over their heads. They used to pass the lads over, young lads over their heads to go at the front. Well actually, at the front though you’d probably see less. Because there was the wall. I don’t know. It might have been just on eye-level with the pitch I suppose. But I never, I never got passed over the heads.”

Eliza remembers that the men in the crowd were more respectful at this time  and tended to stop swearing if women were in the crowd:

“There again they were gentlemen you see. If they saw that there was a woman beside them, they would make a point of saying, “Hey lad, watch your language.” And then the smaller children who couldn’t see further back, they were held over other people’s arms, and they ended up near the touchline. So they could see the match.”

Beatrice recalls that even leaving the ground could feel dangerous, just because there were so many people:

“The other thing I remember is dad waiting when we were coming out, waiting until a lot of the crowd had got away, because you have to come down to go around the corner and down the steps, and again the crowd was pushed against the wall, and you could see people putting their arms out to keep away from the wall. So he would wait until people had got out.”

This British Pathé newsreel footage from 1956 of the game between Newcastle and Sunderland gives a good idea of what it was like on the crowded terraces: 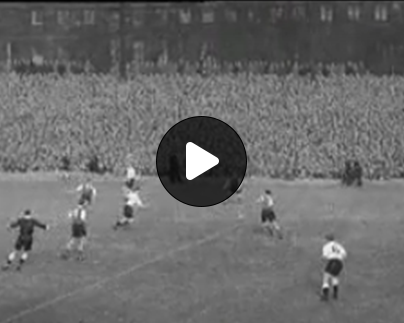